Much of this info comes from the 1900 Census of Long Branch, New Jersey.

I also got information off of the 1880 Census of Atlantic, Monmouth Co., NJ. Cyrus's brother-in-law, "Michael Leane," is also listed. He is 20 and born in Ireland. I did have Mary's name as Lenan, but I changed it to Leane based on this census.

The name on his tombstone is "Cyrinus." I did have a birth date of January 1855, but that didn't match his tombstone which says 1851. Below is a picture of his stone. It comes from an online cemetery site for St. Joseph's Cemetery in Keyport, Monmouth Co., NJ: 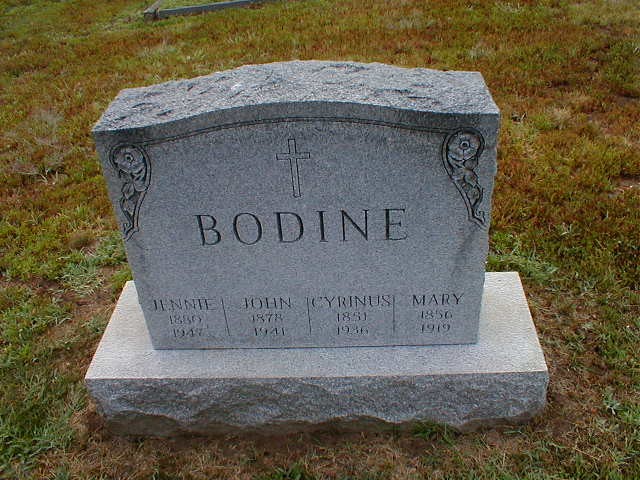 Obituary, Keyport (NJ) Weekly of Friday, 6 March 1936.
Cyrinus Bodine, 84, died at the Hazard Hospital, Long Branch, Saturday, Feb. 29, 1936, following an illness of about a year's duration. Mr. Bodine, husband of the late Mary Linnane and son of William and Elizabeth (Stryker) Bodine, had made his home with his daughter, Mrs. Elizabeth Stauffer prior to being removed to the hospital. The body was taken to the Bedle Mortuary and services were held at St. Joseph's Roman Catholic Church, Wednesday morning at 9 o'clock. Rev. Wagner, pastor of St. Ann's Roman Catholic Church, Keansburg, officiated at the services. Interment was in St. Joseph's Cemetery. Survivors are his daughter, Mrs. Stauffer and a granddaughter, Mrs. Andrews, of 10 Cedar Street, Keyport.