The Leiden Municipal Archives house what is often called the Leiden Collection. These include many original birth, marriage, and death records as well as other kinds of data and books. Many of these records have been indexed by personnel at the Archives who wrote the most important information onto index cards and then bound these together into small books. The cards are arranged in alphabetical order. I believe the LDS has microfilmed many, if not all, of these index books. Sometimes, important information can be found in the originals that is not found on the index cards. I have written some notes regarding Bodines from these index cards on another page. Click here to see those.

Listed below are some of the resources I investigated at the Municipal Archives concerning the Bodine (Bodijn, Bodin) surname. I first want to describe the two main churches that these records pertain to.

This church was constructed between 1400 and 1565. It is a massive building that still exists today. It is known to some Americans as the church where the Pilgrims worshipped before coming to America. They arrived in Leiden in 1609. Many of them left on the Mayflower in 1620 to start a new life in America. Besides the Pilgrims, Huguenots also worshipped in the Pieters Church. Some of them may have been Bodines related to those who wound up in America. Or it's possible that even some of the Bodines who ended up in America actually spent some time attending the Pieters Church. That is just speculation, though. Below is a picture of the Pieters Church. 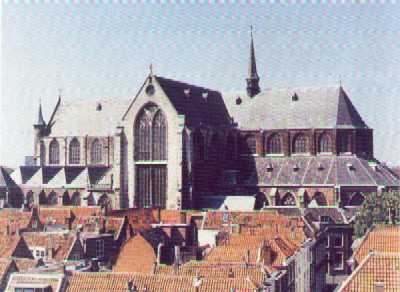 Click on the links below to see other views of the church. Hit Back on your browser to return here.

This is another large Protestant church in Leiden. It is not too far from the Pieters Church. It was originally a wooden chapel, built in 1314. Soon afterwards, it was rebuilt in stone. From 1380 on up, it was enlarged many times, but never finished. Many Huguenots also worshipped in this church and are recorded in the records. Among them are quite a few Bodines. Below is a picture of this church today. 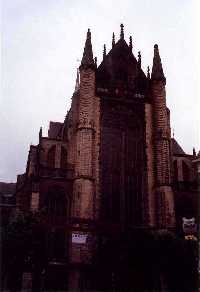 Click on the links below to see other views of the church.

These are in several volumes. If I remember correctly, these books are indexes of the originals. I was told that the originals themselves would not contain any other important information. Some of the abbreviations you need to know are these:

PK: This stands for Pieterskerk or "Pieters Church."

PKNB: This refers to Pieter Church's "New Batiment." I don't think either the new or old batiments exist today.

PKB: I'm not sure what this means, but probably something to do with the Pieter Church.

Bolw: This was one of the places just inside the old city wall where people were buried. It might refer to "bulwark" or "bulwork west."

A grave in the church was about the normal dimensions of a grave on top, but it was usually quite deep and could accommodate many bodies.

In the Death Records, usually, the actual name of the person who died was not given. Instead, it might say "kind van - son of" and would refer to the father or the husband. For instance, in the first entry below, we see that the son of Pieter Bodeijn died on April 12, 1620 and was buried in the Hooglandse Church. This family was living in the Marendorp area of Leiden.

In the column Address are the names of some neighborhoods as they existed in Leiden at that time. They may still have those names today, but I'm not sure. I would imagine that the neighborhood would be somewhere near where they were buried.

There are a number of microfiche on the notary publics who worked in Leiden. The librarian said we might have more luck finding Bodines by looking at the records of notaries who we know signed Bodine documents. Often families worked with the same notaries all the time. The only one I know of who signed a Bodine document was Carel Outerman; so my wife looked through the files on Karel Outerman from 1631 (envelopes 115:1-11 in drawer 48). She got through 115:1-4, but did not find anything. They're very difficult to read.

The originals of these are located at the Archives, but they have also been indexed in four large blue books. These were testimonies that were written up by the church showing that the member was in good standing. They were used when moving from one place to another, usually within Holland. There are several Bodijn's mentioned; although, the only one that perked my interest was a Pieter Bodine who moved to near Hamburg (Hamborch), Germany. This was written on 4-6-1661 (I guess this is in the European format meaning June 4, 1661) in the Hooglandse Church. All the index says is "Bodijn, Pieter nr. buiten Hamborch. The librarian explained to me what this meant (nr. stands for nar). It says that Pieter Bodine moved from the Hooglandse Church area of Leiden to somewhere near Hamburg, Germany around June 4, 1661. I couldn't find the original, but it is somewhere at the Archives. From the looks of the originals I did see, they don't provide much more, if any, information.

Update: I have since found out that a Pierre Bodine married a Magdalena Forback in an Altona (a Hamburg suburb) church on August 22, 1680. He was listed as a Frenchman. This reference is from a book by Schubert. I don't know anything else about the book. I would assume that this Pierre Bodine could be the same as the Pieter Bodine mentioned in the Leiden record above.

These are records of who owned the tombs inside the church. This church still exists and many of the tombs are still readable. However, the stones have been moved at least two times for renovations in the church. Many were not put back in their original positions. These records are described below:

The names of the grave owners and some of the info has been abstracted and indexed and they are located in a card file, handwritten on pieces of 3" x 5" paper. It's a big help to finding who the owners were. Otherwise, one would have to read through the old gravebooks and try to decipher the priest's handwriting. (That wasn't an easy task even when I knew where the record was.) There are two Bodines mentioned in the card file: Peter and Abraham.

1) The first abstract from the gravebooks which contains the name Bodijn says this: Pieter Bodijn koopt van de kerk 11.10.1610. This just shows that Pieter Bodijn bought grave #80 from the Pieters Church. This entry may be in archive index book 752 or 753. I looked some in book 753 and couldn't find it. It's more possibly in book 752. (These indexes would say which actual gravebook the abstract comes from.) I didn't see that he had bought grave #80, but I assume it because of the next entry.

2) The next abstracts are in a different gravebook, the one from 1663 (see pictures below). The abstracts say this:

These three entries are all found in one location in the Pieterskerk gravebook from 1663 (N. H. Kerkvoogdij Archives, no. 755: Pieterskerk, met register op voornamen, 1663 e.v., 1 deel). It is in folio 155, number 80. I took some pictures of the book and page (see below). There was an index in this book that went by first name. It helped me find the right page for Abraham Bodijn. I checked the original gravebook (marked 1663) that has the entry where these names occur. Here below is an image of my copy of that entry. (Click on the image for a slightly larger picture - 110 kb. Hit Back on your browser to return here.)

The librarian transcribed and translated it for me. Basically, it is the transferral of the family grave to Abraham Bodijn, son of Pieter Bodijn and Maria Cosyns. Pieter is the one who first bought the grave from the church in 1610. This is what it says, more or less (I have underlined questionable parts of the transcription):

This grave is now transferred to Abraham Bodin to be received as a legacy from his mother Marya Cosijns, when she was alive the administrator (boelhouster) of Pieter Bodin, by appendix willed on the date September 18, 1647. This record was made by Carel Outerman, notary known to us, on September 29, 1664 made a request to us.

It appears that this request was probably made by Abraham in the year 1664. I guess his mother, Marya Cosijns, had willed the grave to him. I have copies of Peter and Maria's will and administrations, but so far I don't understand much of it. Their will and other administrations are over 100 pages and it is all written in 1600's Dutch! Click on this link to see more about the wills and administrations of Peter Bodine and Maria Cosijns.

Click on the links below to see two different views of the Grave book from 1663.

And here is a picture of where I think Peter Bodine's grave used to be located. I'm sitting by the spot. 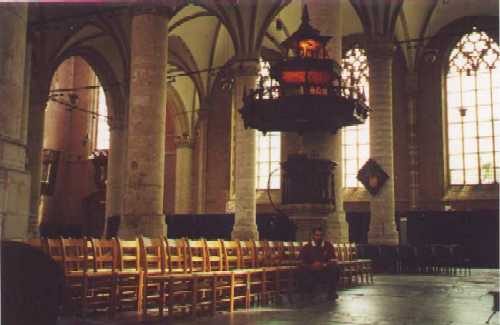 All the graves were cleaned out a long time ago, but the grave slabs still cover the floor and many are still readable. However, the slabs have been moved several times and many were not put back in the correct places. I believe Peter's was misplaced. At least, it is not in the place where I think it ought to be. I do believe we located the area where he should have been buried. We figured this out by reading the section header in the 1663 Grave book. It says that the graves in that section are "in the middle of the church, beginning with the north mother (noortmoer) pillar, going to the last circular pillar in the west." Of course this was in Old Dutch, but the people working in the church when we visited were a great help. They were not exactly sure about the word "noortmoer," but it seems it referred to one of the main pillars, the northeast one located in the middle of the church. (I was recently told that 'noortmoer' is probably 'noordmuur' meaning "northern wall.") The graves then seemed to proceed toward the front of the church in numerical order. It went something like this:

I'm just going by memory on these grave numbers, but it was something like that. Following this pattern, and heading west, we located where grave #80, Peter Bodine's grave, should have been. However, the numbers after grave 70 or so were all messed up and many, including #80, were missing. His grave is located toward the front of the middle church, in front of where the altar used to be. See the picture above.

We did not have time to look through the rest of the records listed on this page, but I believe they are readily available on microfilm from LDS Family History Centers.

Trouwboeken (Pieterskerk marriage records), 1585 - 1795: These are on microfiche, but would be tedious to read. The Municipal Archives have made abstracts of these records putting them in a more readable form. They are arranged in alphabetical order by last name.

The following is some kind of summary from the notebook Hulpmiddelen Bij Uw Onderzoek at the Leiden Municipal Archives. It comes from the section called "Overzicht van de Indices (Klappers).